Between 1978 - 1980, Doris Cordova began to acquire some of Sandy Travis’ dogs, embarking on a program to specifically create the Miniature Australian Shepherd. 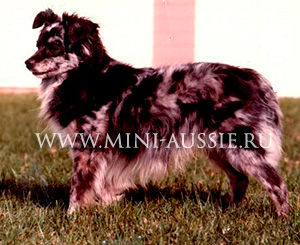 During this time Ms. Cordova actively sought breeders who would continue the development and registration of these dogs as MAS. Most notably among them were Charles Lasater (Valhalla) and Bill and Sally Kennedy (B/S).

Once Doris Cordova came to a show Jeanine Perron was attending with a very small Aussie telling people that it was a miniature. Jeanine and Doris quickly started talking about mini's and thought that a place for such a small dog might exist in the dog world.

After dead Doris, Spike was placed with Bill and Sally Kennedy, also of Norco, California, to continue to develop a line of miniature Aussies under the B/S kennel name.