Despite the almost complete absence of at least some information about Susan Sinclair and the Wanna'be kennel on the modern Internet, her contribution to the development of the miniature australian shepherd is invaluable and very important.

Mrs. Sinclair is from Georgetown, South Carolina. Dogs were a hobby of her whole life and were always there. Since 1971, Susan began breeding purebred show dogs.

Their common interests continued even further - Kathy and Susan became the founders of the first breed club - MASCUSA. They survived its renaming into NAMASCUSA, the split of clubs and their separation, while maintaining their views and defending their interests. Susan Sinclair led the club for 6 years, and then changed her presidency to a member of the board of founders of MASCUSA. 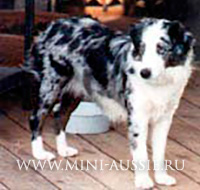 Destiny's Wanna'be Jazz is the fundamental female, founder of her own mini aussie line with the prefix Wanna'be. This dog left excellent descendants and lived for long 15 years (she died in May 2004).

With a total experience in cynology of about 40 years (from 1971 to 2010), twenty of them were dedicated to the breed by a miniature australian shepherd. Such a contribution to the development and popularization of the breed is difficult to underestimate. Dogs with the name Wanna'be lived throughout the United States and beyond, they are found in the pedigrees of almost all modern mini aussies.

Perhaps the success of the dogs of the Wanna'be kennels is easy to explain: Susan Sinclair actually managed to get universal dogs! They were the show stars, outstanding in agility and obedience, showed the expressed working qualities in herding, and were also excellent companions (numerous enthusiastic reviews of their owners testify to this).

Perhaps one more historical moment in the breed - it was then that miniature aussies proved to everyone that they were competitive not only in shepherd’s work, but also in sports. For example, in agility, even then, border collies were second to none. Mini aussies Wanna'be achieved excellent results on any track - agility, jumping, gamblers. They attracted attention and gained more and more popularity.