Taycin kennel - are a four-generation (just recently became a four-generation) family dedicated to raising quality dogs. Kennel are located in Santa Ynez Valley, California, Santa Barbara County. Breeders are proud to say since 1972 have had and raised Australian Shepherds and Miniature American Shepherd. 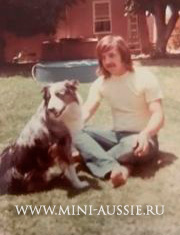 In May 1971, Curtis Taylor was stationed at Vandenburg Air Force Base in Lompoc, California. He found a bloody, dirty puppy by the side of the road. He picked it up and tried to find out who lost the little guy. No one claimed him, so Curt took him to a vet and was told that the dog was an Australian Shepherd. The pup was about 11 months old.

As Curt was being discharged on June 4th, he chose that date for the dogs birthday, and named him Chupanako, greek for 'Little Shepherd."

About two years later, Curt met and married Cindy Perron. Their next door neighbors raised and showed German Shepherds. Their neighbor thought that Chuppy was a purebred and further suggested that he be shown. Chuppy was taken to a fun match and took Best of Breed! Needless to say, that victory was pretty exciting! After a couple of Best of Breed wins, other breeders became interested and we then verified that he was indeed a purebred. Chuppy was registered with the Australian Shepherd Club Of America, (ASCA) with an unknown pedigree. Taycin Kennels was born, "Tay" for Taylor, "Cin" for Cindy.

Cindy gave her Aunt Hugette a Chuppy puppy, "Taycin's Country Bumpkin", aka Tuff Stuff, which proved to be too much for her. Jeanine Perron took him to a show to see if anyone might want him. Instead, she entered him in the show and took Best Of Breed. Guess who was hooked! Ch. Taycin's Country Bumpkin, aka Tuff Stuff, was by Jeanine's side for 15 years. He was the best, producing many great puppies. 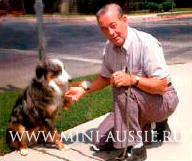 "How did the North American Miniature Australian Shepherds get into the picture? At an ASCA show, Doris Cordova came with a very small Aussie, telling people that it was a miniature. The quality was not too good. I told her that I felt she could improve the breed, I thought a place for such a small dog might exist in the dog world. For the most part, standard Aussie breeders didn’t like the idea of a miniature replica.

She bred her bitch to a small standard I had (Taycin's Mr. Blue Eyes). The puppies were much improved. Doris didn’t have the opportunity to pursue this breeding program. She passed away, and her progress was lost.

I was selected as Executive Board member of the newly formed North American Miniature Australian Shepherd Club of the USA as Vice President и actively encouraging and promoting the sound, responsible breeding practice. A few years later, along came Kathy Croswhite-Munson with a couple of small dogs-Mini! Again we used another small standard male of ours, Oaktrail’s Flaming Arrow. In that litter was future Ch Destiny’s Radiant Ruby. She became my foundation bitch". 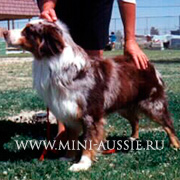 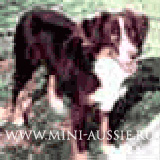 Since that humble beginning, Taycin have become a four generation kennel. Jeanine Perron managing the team, Cindy Taylor and her two daughters, Karen Keller and Regina Blair, and now granddaughter Jaisa Blair stepping up to the plate.